Just what I needed!

So, as you gathered from my post below, I've been struggling this week with being on the healthy bandwagon.  I pigged out big time with the pizza, and unfortunately had ditched my training program for Monday, Tuesday, AND Wednesday.  Yikes.  That makes 8 miles of running that I missed.  Totally not cool!  Anyway, yesterday was supposed to be a "rest" day  but I definitely knew I hadn't earned a day of rest so I decided to get a run in.

I need to add that it has been right around 30 degrees all week long so it's been much colder than what I've run in before.  This fact has greatly contributed to my lack of desire to go running.  It's hard to motivate yourself to step out into that cold weather!  But, after some hemming and hawing last night I finally sucked it up and stepped out into the crisp air and set off for what I had planned on being a 3.5 mile run.

It became clear right away that I was overdressed.  I hadn't needed the coat or the gloves I had brought on my run, so I tied the jacket around my waist and held the gloves in my hand while I ran.  Annoying, but better than being too hot!  When I reached the 1.75 mile mark where I needed to turn around, I felt so good I just kept going.  I ended up going for 5 miles, and it was delightful!  It was the first run I've ever had where I could say I LOVED running.  Usually I just tolerate it!  But last night was different--it was amazing!  This is just what I needed to get me back into gear.  I've got to stop getting in my own way!  I'm so close to what I want!

Anyway, before my run last night I had the hubster take some photos of me in my new running gear for ya.  I hope you enjoy! 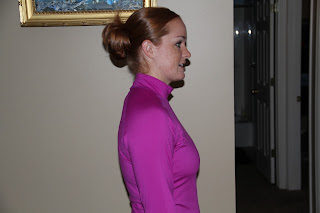