It's Friday which officially marks the end of the hellish week that was my work week.


Not sure what this week had against me, but seriously--work was nuts!


Today at 5 pm I am getting my body fat tested.  I am both simultaneously looking forward to it and horribly dreading it.  I got my body fat tested (on a scale rather than the bod pod as I'm doing today) back in January 2010, April 2010, January 2011, and April 2011.  I will be interested to see how it compares to the April numbers.  I haven't lost any weight since then; in fact, I weighed in at the exact same amount this morning.  However, I am hopeful that some of the fat has been converted into muscle mass!  We shall see.


The beauty of getting your body fat tested is that it eliminates the fluff.  The number doesn't lie.  It isn't like the scale that you can blame on being more muscle mass or too much salt from the night before.  It's a real number that tells it like it is.  Today I will really know how healthy I am on the inside. 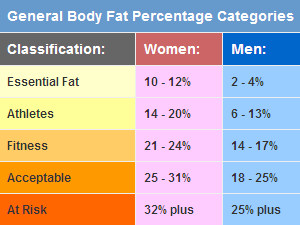 So...where did I start at?  Let's have a quick look at the (horrifyingly) eye-opening numbers:


(edit: I have no idea what is up with the white highlighting...can't make it go away)

Gotta love the weight plateau from January 2011 until now...YAY!  I am hoping the new body fat percentage number today will be closer to 27% or lower.  However, I am expecting a number even higher than 31%.  I just don't feel as healthy as I did back in April.  I imagine that later today I will be having a reality check.  Hopefully it is enough to get me back on track and make me start being honest with myself regarding my food decisions and (lack of) workouts.

I do realize that because I am comparing numbers from a body fat scale (a doctor administered test, but a scale nonetheless) that it won't be as accurate as the bod pod testing I am doing today so there will be a margin of error.  However, last year when we got the body fat tests done Hubster didn't think his number was accurate so he went up to get a bod pod test done and the number was exactly the same.  So there's that.


I need to be held accountable, and I used to use this blog as a way to keep me on track.  I don't know what stopped me from working to succeed at my (weight-related) goals, but I know what I have to do to get back to the basics.  So...that means that I will post the new results from my test once I have them, no matter how awful they are.  Time for some transparency that will hopefully shock me into never wanting to see bad numbers again!


Also, just saw this video and chuckled a bit.  My Drunk Kitchen makes me laugh on a weekly basis: