Crazy enough to run in a snow storm...

...and crazy enough to post video of myself after the run!

The weather was awful.  It was wet, snowy, and downright cold.  There were puddles all over the road from the thunderstorms from earlier in the day, and the snow was coming down in big huge flakes that kept getting stuck to my eyelashes.  Memo to self--wear a hat with a big long bill on the next snowy run, preferably one like the kid from Sandlot:

Even with the bad weather, it was a great run.  My pace is nearly back to where it was before I injured my calf.  Let's hear a hoorah for that!  HOORAH!  Here's a quick look at my splits: 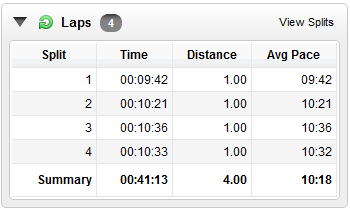 Not bad, not bad.  I was worn out and tired, but it felt good to make up for my missed miles from Monday.  I'm officially caught up!  I'm at 19 miles for April and I only hit 24 in March so I'm well on my way to surpassing last month.
So...about that video I promised...
I couldn't help but film the "before" and "after" for this wet run.  I knew it would be interesting, and I had to document it!  So, enjoy...
And here's my thoughts after the run.  I did drop my ipod in a 3" deep puddle so hopefully it isn't permanently destroyed.  That meant that the remaining 3 miles were ran in silence just listening to the snow hit the ground and the cars pass by.  It was somewhat peaceful until I started getting tired and my breathing went crazy.  Then I really wished I had a working ipod!

The video didn't show the wetness of my clothing very well, so I snapped a quick picture.  Brrr! How do you keep yourself dry when working out outside?  I clearly need some advice!
Posted by Becky at 7:54 PM