Wind in my Face

Confession:  I did NOT want to go running yesterday.  I had 4.5 miles to run and I got home and looked at the windy weather outside and my couch and the couch instantly won.  I browsed netflix, found some good movies to watch, changed into my PJs and decided it was time to veg on the couch.  After all, I was injured, right?  It was a valid excuse...

...except I knew that was a lie.  My injury is healing up nicely (went to the doctor, everything will be A-okay) and it wasn't going to be injured further by running.  I'd already proven that by running 10 miles the day after it happened and it was a LOT worse off then.
The more I thought about skipping out on this run (making it two runs I would've missed this week) I realized that not only did I not want to be the person who continually skips workouts because she doesn't "feel like it," but I also realized that I have a half marathon in THREE WEEKS and it is downright stupid to miss runs when I need all the training I can before the big day.
So I changed out of my PJs and into my workout clothes.  I laced up my shoes, popped my earbuds in, and took a step out into the (windy) sunshine.  The goal was to not walk any sections of the run.  All this walking I've been doing lately is discouraging me and making me feel like I am incapable of reaching my goal to run a half marathon.  It's bad territory because then it starts me on thoughts like "what was I thinking?" or "I'll never be good enough to do this" etc.  I wanted to put a stop to those thoughts right away and the best way for me to do it was to have a good run.
First thing I noticed was how decidedly windy it was outside.  It was going to be a tough run because I would be running straight against a huge headwind for the first half of my run.  However, I took comfort knowing that I would be able to use the wind to my advantage on the way back.

The second thing I noticed was the severe lack of runners on the trail I was running on.  Normally this is a happenin' trail...apparently they got wind (heh) of the wind and opted to stay home watching Netflix like I nearly did.  It was actually kind of nice to have some privacy on the trail as it allowed me to relax and just listen to my music and run.  I felt surprisingly good on the trail!
I felt so good that I ended up running 5 miles rather than 4.5 and my pace was just under an 11:00 mile.  I had my garmin stats to show you, but my garmin froze and deleted my run.  SAD!  One thing I did notice after my run when I was cooling down is that my heart rate monitor is clearly not registering correctly.  I'd been done with running for at least 2 minutes and was in the middle of a nice calm stretch when I looked over and saw the monitor reading 243 bpm.  Yeah...not very likely.  I did a quick manual check and I was more around the 120-140 range so I need to figure out what's going on there.
Anyway, I felt a million times better about myself when I got home from the run.  I didn't have any guilt associated with being lazy, and I felt slimmer.  Looking in the mirror I actually looked skinny to myself, which hasn't happened for many months now.  It was a great self esteem boost...AND there was no walking!  BOOYAH!
I also decided to catch up on my measurements.  It's been a while since I've posted my weight or my dimensions...admittedly, I knew they had gotten worse and I was too ashamed/disappointed to make it official by publishing it on my blog.  Last week I weighed myself and I was clear back up at 156.8.  I'd gained 8 lbs back that I had worked so hard to lose!  Talk about frustrated...  It was a good gut check that it was really time to get back on track and count the calories and do the workouts.  Happily, I can say I undid quite a bit of damage and this week looks better: 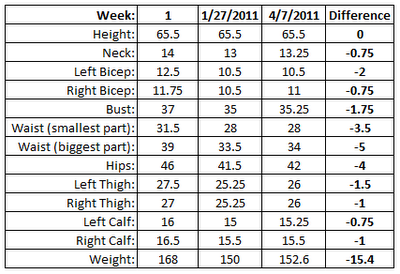 My goal for the end of the month is to be down around 148.  It will be tough because my body seems to want to hold on to this weight, but I know I can do it.  Somehow, I think running 80 miles in one month will be a nice kick start to my weight loss!  It will be nearly double what I've done in past months.  I'm at 15 miles already for the month, so I feel pretty good about my progress.  I'm going to go for a run tonight (weather permitting--it's supposed to snow like crazy later) to try to make up for my missed run from earlier this week. Send good weather vibes my way!
How are your goals for the month of April coming?  Are you on track?
Posted by Becky at 10:26 AM