Who knew that bike crash at 1 mph could cause so much damage?

**Important note--this post contains details that would be considered an overshare to pretty much anyone.  Read at your own risk (especially if you're a boy)!!**

What a weekend!  I escaped rainy Salt Lake City and headed down south to beautiful Zion National Park for a belated birthday celebration with Hubster and some friends.  The weather was in the 80s each day we were down there and I FINALLY was able to warm my poor bones up.  It was fantastic! We left work around 1 pm on Friday and began the 5 hour drive.  Rather than go to the hotel in Springdale, we opted to just go straight to the Jem Trailhead and change into our biking gear there and get a ride in before it got too dark.  I've ridden this trail 3 or 4 times and I love it.  There are always a few spots I have to walk, but for the most part it is a great beginner's ride.

This time Hubster decided it was time for me to be brave and actually bike some of these scarier sections.  After some hesitation, I attempted the first downhill section.  For all of us beginners out there, it is important to note that you should ALWAYS keep your weight back on the bike when going downhill.  If you don't, you will crash.  Could this be some foreshadowing?  Perhaps...  Anyway, I made it down the first hill without much fanfare.  It was scary, but doable.  I felt like a rock star and decided to be less timid on the upcoming downhill sections. After biking about a mile in (the trail is about 6.75 miles long) we encountered yet another section of downhill.  This one was a bit more technical; it had a rock portion that the bike would have to essentially jump over rather than have a smooth connected track.  To be honest, it freaked me right out.  Hubster was encouraging and once again convinced me that "I got this."

I definitely did NOT "have this".

About halfway down the stretch, I realize I am in trouble.  I am going too fast and my weight isn't far back enough on the bike and I am in severe danger of "endo-ing". 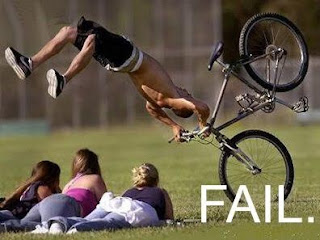 I did not want to be that guy.  I wanted to stop my bike and just suck it up and walk the rest of the stretch.  So I applied my brakes (lightly, ever so lightly) and got my bike slowed down to about 1 mph.  I set my feet down on the ground to get my weight off the bike and that's when it all went wrong.  My bike had too much momentum and gravity wanted to make sure that I got nice and friendly with the beautiful dirt in Zion.  I felt the bike slipping out of my control and my balance began to falter as the bike pushed me forward from behind.  It ended up racking me (in my girly bits!) something WICKED and then caused me to face plant on the ground.  I managed to hit every part of my body that I could; my nose, my chin, my chest, my stomach, my thighs, etc.  Each of them made contact with the ground in a very graceful (lies) manner.  It hurt so very very much.  Mostly, I was distracted by the pain coming from my poor girly bits.  Yes, I had caused some severe damage "down there."  After some tears escaped (couldn't be helped...) I sucked it up and decided to continue with the ride.  I felt pretty sheepish for having cried, but the pain was so sharp I couldn't hold them back from falling.
The ride continued for 6 more beautiful miles and eventually I got used to the pain and had a great time.  I was sore, but I had enough adrenalin that I was able to ignore the majority of the pain (until I hit bumps!).  At the end of the trail, I was feeling good.  The scenery was beautiful, and I was biking at a better level than I was when I left off last year.  Cardiovascular wise, I was also in better shape.  All in all, I was proud of myself. The girls waited at the end of the trail while the boys drove up to the start of the trailhead to pick up the vehicle.  While we were waiting, I suddenly realize that my thighs are quite sore.   I hadn't even noticed I had hurt them.  I had been so distracted by the other pain that I hadn't realized I was hurt anywhere else.  When I got back to the hotel, I checked out the damage: 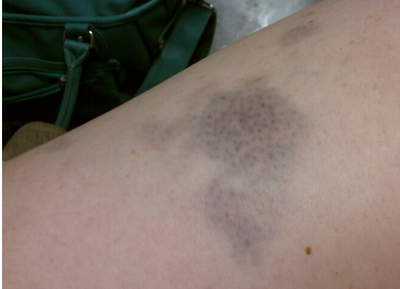 Both of my legs look like that..and it's actually a lot more purple in real life.  Ummm...oops?
I was actually hurt a lot lot worse in my girly region.  Not to go into too much detail, let's just say that it involved blood and when I had my husband check it out he said I likely needed stitches.  Suffice it to say that I was in QUITE a bit of pain down there and I continue to be.   I didn't even know you could hurt yourself that badly with just a direct hit from the bike.  Thank goodness that I was wearing padded biking shorts or it would've been even worse!

After I found out what I had done to myself, I felt a little bit better about the tears that were shed on the mountain.  I feel that the majority of women would agree that it's okay to cry when you've hurt yourself so bad down there that stitches are called into question.  And for those of you wondering, I didn't end up getting stitches.  It was 10 o'clock at night by the time I realized the extent of the damage (we'd gone to dinner directly after biking) and all the clinics were closed and I'm a cheapskate and didn't want to pay emergency room fees.  I do have a call in to my local doctor here though just to be safe.

So...after this adventure I have to ask:  What's the worst damage you've done to yourself in a biking crash or from a fall while running?
Posted by Becky at 11:59 AM