I survived Hellth week!  I went to all 6 workouts and pushed through each work out to the best of my abilities.  There was lots of sweat, a little bit of bruising, and a lot of (good) pain. 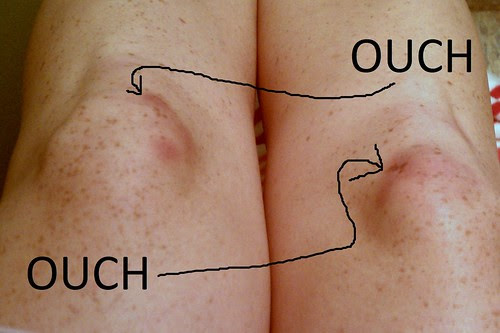 And it was awesome.

On Saturday I woke up wanting to have a rest day more than anything.  I did not want to work out.  I did not want to do another round of burpees.  I just wanted to sleep in and be lazy.  But I went anyway and I was glad that I did.  Oddly enough, after all my whining about not wanting to do another workout, on Sunday I found myself itching to work out.  Even though I was finally getting a rest day where I could be lazy without guilt, I really just wanted to go out and get some exercise.  I don't think I will ever understand myself!

By the way, I wanted to share some deliciousness that I enjoyed this weekend as well.  Hubster has challenged me to find ways to eat tasty but with healthy ingredients.  Easier said than done, right?  Well, I found a recipe I wanted to try after reading this post from Escaping Obesity.  I found myself intrigued by the Cauliflower Pizza.  I love pizza; who doesn't?  But we all know it is really bad for us so most of us try to stay away from it.  Anyway, I figured it would be the perfect starting recipe for the year!  Off to the store I went to buy some cauliflower for my experiment (because there is never any in my house because I do not like it).

The recipe was very easy to follow and the pizza "dough" was ready in no time!

I made two different pizzas.  Hubster and his brother were coming home from visiting their Grandma in the hospital and I wanted to make sure they had some options to eat when they got back.  I did NOT tell them that the crust was made mostly from cauliflower.  I wanted to see if they would even be able to tell me what the secret ingredient was!
I have to admit that I did not wait for them to get home before sneaking a piece.  I didn't want to serve them something that was uber-gross.  I can't stand making foods that people don't like to eat!  I'm not a fan of cauliflower, so I was really expecting to not like this very much.  However, I can say I was pleasantly surprised and I thought it was delicious.  Seriously.  I will probably never make normal pizza when I can make this and have it taste pretty much the same and be much healthier.  It is also a much easier way to make pizza than having to hand-make dough.  Win-win.
The pizzas were completely consumed before the end of the night.  The boys could not guess the secret ingredient, and all agreed it was tasty.  My only complaint with the recipe is that the crust needed to be a bit more crispier.  I will cook it a couple minutes longer next time--simple fix!  I give this recipe a 5 out of 5.  I think I will also adjust the amount of cauliflower in the crust the next time I make it; I will add MORE of the vegetable because it really didn't impact the flavor at all.

So yeah--go try it!  I think you'll be pleasantly surprised!

By the way, I want to thank whoever actually listened to my request and prayed for snow for our area.  We got a snowstorm that night!  It was so wonderful to wake up the next morning to half a foot of fresh snow.  It was beautiful!
Do any of you have some healthy recipes that actually taste good?  I'd love to hear about them!
Posted by Becky at 4:22 PM